What’s So Special About The Boxer Engine? 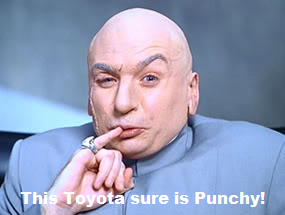 So why does Dr Evil think that this Toyota 86 2.0L Boxer engine packs a punch? I mean there are other BIGGER, thirstier V8 engine’s out there. And there’s no denying the thrill of the roar coming out of a true V8 powerhouse. So why did Toyota choose the Subaru Boxer engine for their groundbreaking Toyota 86? I will attempt to make some sense of this in today’s post.

Subaru has a rich legacy in the World Rally championship with their distinctive yellow and blue Impreza WRX (Wanna Race Ekse 🙂 ) cars, winning the manufacturers title 3 years in a row in 1995,1996 and 1997. And as all Durbanites know, when you see one of these beasts raring up to you in your rear-view mirror, you better give them way. So it’s natural that Toyota would draw from their engineering expertise in powering the beautiful new Toyota sports car. But what makes this “Boxer” engine so different? In a nutshell, it is dynamics. In a traditional in-line engine like the ‘Straight 6’, the pistons fire alternately in an upright position. This action of the pistons powers the crankshaft which re-routes the power horizontally down to the transmission, and drive-train. Firstly, this creates an inert vibration by the action of the pistons as they fire at massive speeds. This vibration has to be countered, by various balancing components and design. The ‘Boxer’ engine, is free from this need. By having the pistons arranged horizontally in the engine block, and the fact they fire in an alternate counter fashion, means that this vibration is cancelled out by the opposite piston and this translates to a sweet balanced engine.

But this is not the only benefit of this engine. Having the engine lie flat and horizontally, means that the engine can be mounted lower in the engine bay, contributing to a low centre of gravity, which give Boxer-powered cars their superb road-holding and balance. Another factor is by not requiring many of the countering components that an in-line or V-type engine would use, the flat Boxer engine naturally has less frictional loss of power. As the power is generated horizontally, it travels in a near straight line to the transmission and drive-train and there’s no need for re-routing it, as in other engine designs. All this adds up to a delectably enjoyable driving experience, without burning your wallet or the planet.

So all that is left now is, for you to take your Toyota 86 and #GoPlay