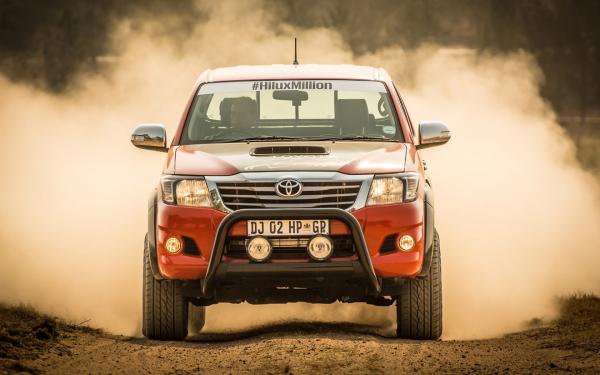 It’s kinda special that in July this year Toyota SA delivered its one millionth Hilux one-tonner.

It was a single cab 3.0 D-4D Legend 45, sold to Pretoria businessman Shabier Aboobaker.

Along the way the South African-built Hilux has picked up a reputation for indestructibility – even the automotive hooligans of Top Gear had to concede they couldn’t kill it – that has stood it in good stead in off-road racing all over the world.

In the South African cross-country series, Hiluxes have won the past seven manufacturer’s titles on the trot, in the hands of former champion Duncan Vos, defending champion Anthony Taylor and current championship leader Leeroy Poulter.

Former Dakar winner Giniel de Villiers took South African-developed and built race Hiluxes to third on their Dakar debut in 2012, second in 2013, fourth in 2014 and second again in this year’s edition of the world’s toughest motor race.

Add to that strong showings by various international drivers in rounds of the Cross Country Rally World Cup – including a win and a third in Russia, a win in Brazil, third in Qatar, second in the Rallye de Pharoahs, second and third in Italy, and second again in the Hungarian Baja this year alone.

So, to celebrate all that silverware, and the millionth Hilux on the road in South Africa, Toyota SA decided to build a one-off show car that would embody the dream of many a motorsport fan.

A street-legal version of the five-litre V8 off-road racing Hilux.

Toyota Motorsport boss Glyn Hall started by dropping in a Lexus IS-F engine, the same as is used in the race trucks, with a Dakar-spec inlet manifold, wiring harness, a Pectel Cosworth engine management system linked to an AIM electronic instrument panel, and a full tubular exhaust system to get the most out of the V8’s direct fuel-injection set-up.

It has a twin-plate AP racing clutch but the D-4D transmission is standard, bar the essential modifications to mate it to the Lexus engine.

The IS-F doesn’t have all wheel drive, of course, so the sump has had to be modified to make room for the front-axle differential on the Hilux; both front and rear differentials have been modified with revised gear ratios because, with more than 335kW on tap at 6000rpm, this is probably the hottest Hilux in history.

“But you can’t just add all that power without ensuring that the vehicle can handle it,” advises Hall. So he’s lowered the suspension by 50mm, upgraded with fully adjustable dampers all round, uprated the power-steering pump and increased the steering ratio for quicker steering, and fitted chunky 18 inch rims over 350mm Power Bake discs and billet callipers.

The show truck cost close to R1 million to build, and there were no plans to make any for sale, but Toyota has already received a number of calls from people asking how much they should make the cheque out for, so nothing’s impossible.