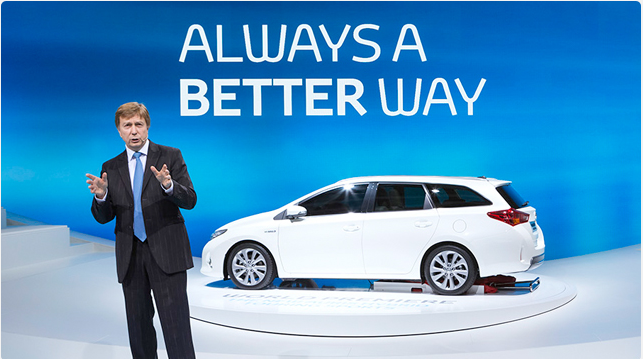 How did a company that started as a textile loom manufacturing company in the early 19th century, transform into one of the biggest Auto Makers the world has seen? Part of this has to do with what is referred to as the “Toyota Way”.

So what is the Toyota Way? In its simplest form, it is 2 basic principles. Kaizen – which means continuous improvement. And respect for people. This can be expanded to form an entire industry of Business Management. And it is no exaggeration to say that many other industries have followed suit, and implemented parts of Toyota’s philosophy in meeting the demands of the modern industrial era.

On the inauguration of the Toyota Motor Corporation in 1937, Kiichiro Toyoda – who was the son of Toyoda Automatic Loom Works founder, Sakichi Toyoda, exclaimed – “Each person fulfilling his or hers duties to the utmost can generate great power when gathered together”. This deeply ingrained philosophy of personal responsibility, meant that whereas in the early years of Toyota, when their more illustrious American motor manufacturers like Ford, and Chevrolet had already been churning out motor cars for years, Toyota was able to overtake them in a matter of years by getting more out of what limited resources were available at the time. Toyota coined the term Just-In-Time production system to describe their production system, that pioneered their unique “pull” system where no time or raw materials were wasted in overproduction that was the norm in traditional “push” systems. Having started in the motor industry after the Americans,  also meant that they had a clear and precise goal. “Beat the American firms at their own game and become the worlds leading Auto Maker in a few years.”  This enabled Toyota to have a laser-like focus in working towards achieving this goal – a goal which they officially achieved in 2008 by surpassing GM in total worldwide vehicle sales. This was the first time in 77 years that anyone other than GM held the top spot for most number of vehicle sales.

Another basic principle of the Toyota Production system was the Five Why’s. When confronted with any problem in the system, 5 why’s were to be asked, and after 5 why’s one would be confronted with the How, wherein would lie the solution to the problem. So if there was a failure in the assembly line, instead of just having the faulty equipment fixed, one would need to question why did this piece of equipment fail. This would lead to an answer similar to “because the part concerned overheated”. Asking another why would lead to “because there was insufficient lubrication or ventilation”. Asking why yet again would lead to “because maintenance wasn’t completed on time”. Ask why again – and this would perhaps lead to “because nobody knew that it was due for maintenance”. This would lead to a review of the system, ensuring the maintenance schedules were updated and everyone involved made aware of this. This relentless pursuit of improvement lies at the heart of the Toyota Way!

Perhaps Toyota’s biggest success in applying this principal of Kaizen though, lies in another sphere altogether. Progressing as a modern society together with safeguarding the environment around us. This forward planning and thinking of Toyota ensured that while other Auto Makers were still producing gas guzzling vehicles, Toyota was well on the way of researching better ways to build the motor vehicle. This culminated in the development of their Hybrid technology and their flagship Toyota Prius – the best-selling hybrid vehicle in the world. For the second year running, Toyota has also been named the top “Green” company in the world. This is quite a remarkable achievement considering that the car industry traditionally produced carbon spewing machines. As a Kodawari certified dealership, we at Durban South Toyota, are also strictly bound and audited by Toyota SA, to ensure we follow their goals of sustainability, and development of a society in harmony with nature.

And it is these same basic principles that we can all apply to our own lives, in taking personal responsibility in our jobs, personal lives and all other dealings, to make sure we do our best, with what we have, and right where we are!

I hope you enjoyed this post, and if you want to learn more of the Toyota Way, there are literally hundreds of books available on Amazon on the subject, one of which I would highly recommend is the Toyota Production System: Beyond Large Scale Production by Taiichi Ohno.