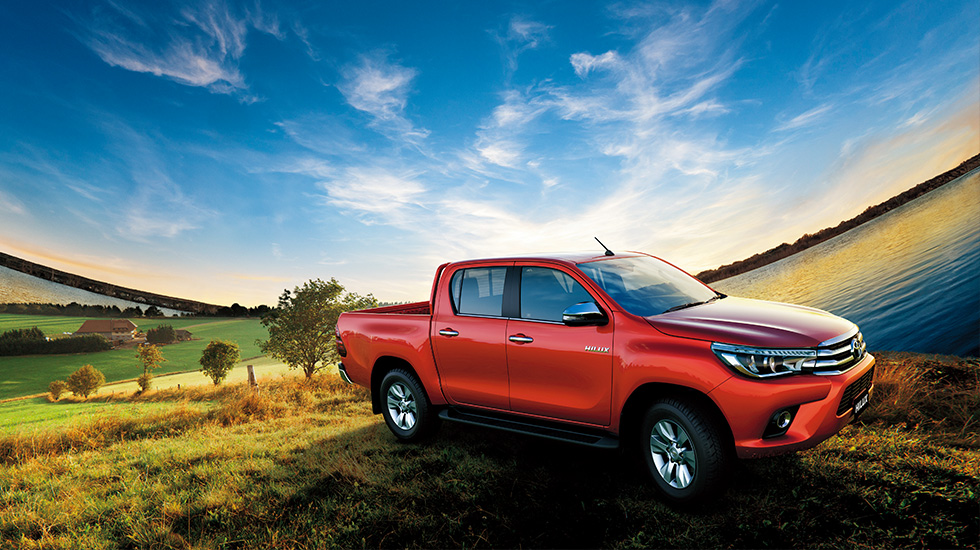 Edit: 11/03/2016 Before getting to the meaty stuff, check out this short clip taken at our official Hilux open day! Good to see our customers are not camera shy 🙂

We’re less than 2 months away from the launch of the all-new Hilux. The new model roll-out will begin in the latter part of February, and the full range will be available by March.
Guess what that means? Lots of fun and activities planned ahead! We cannot reveal all just yet, as we’re still finalizing the finer details, but keep one eye on this blog, and the other on your inbox. And if you’re still not on our email list – doh! Do it…now. Just hit the bright orange button on the right and enter your details.

We also received confirmation that the new generation Fortuner is set to launch in April 2016! To get your motors revving, I’ve included a sneak peek below. What do you think? Gorgeous, powerful, mesmerizing are words that come to my mind!

It’s been a long time coming. But I dare say, it was well worth it. The world’s best-selling pickup has raised the bar even further and is set to crush the competition in its wake.

It’s all-new, inside and out. Comfortable as any SUV, but also ready to take a beating in the bush. I’ve linked to an Australian 4X4  YouTube review below, in case you don’t believe me. You know the Aussies are a tough bunch. So when they say they’re impressed – you better believe it.

Here is the new engine lineup:

The popular 3.0 D4D engine has been replaced by a brand new 2.8 GD-6 motor. This undoubtedly will be the flagship engine to go for.

Though it’s down on engine size, the power output has increased from 120 kw to 130 kw thanks to Toyota’s engineer wizards. Another plus is the fuel consumption. It’s now one of the best in the pickup class: 8.9L/100 kms with mixed driving.

The low speed torque on the new engines have been increased, so the bakkie is much more responsive when accelerating. For the technically minded, peak torque of 420 nm on the manual and 450 nm on the auto models, is available from as low as 1,600 rpms.

An all-new ladder frame chassis provides extra strength to the Hilux, resulting in an impressive towing capacity of up to 3.5 tons.

Trivia Box: What Does GD-6 Stand For?

GD stands for “Global Diesel“, a brand new range of Toyota diesel engines. The hallmark of the GD engine series is fuel efficiency and advanced thermal combustion technology. The 1GD-FTV is a 2.8L,  straight-4 common rail diesel engine with a variable nozzle turbocharger (VNT), chain drive and Intercooler. It generates 132 kW at 3400 rpm, and 450 newton metres of torque at 1400-2600 rpm when mated to a 6-speed automatic transmission. With manual transmission, outputs are 132 kW and 420 newton metres.

The 2GD-FTV is a 2.4L straight-4 common rail diesel engine with a variable nozzle turbocharger (VNT), intercooler and VVT-i. It generates 111 kW at 3400 rpm, and 400 newton metres of torque at 1600-2000 rpm when mated to a 6-speed automatic transmission. With manual transmission, outputs are 111 kW and 343 newton metres.

Where do I start? This vehicle is jam packed with all Toyota can offer.

All models (besides the 2 workhorse bakkies) comes standard with an electronic climate control system. Gone are the days of manual dials. The system features a stylish LCD display with one-touch on/off.

One of the additions, that’s difficult NOT to notice, is the touch screen multimedia system. It looks like a 7″ tablet and works much the same. The audio system is controlled via touch capacitive switches. And on the Raider models, the touch screen system includes an SD card GPS navigation system.

Not wanting to bore you with a shopping list of other features, I’ll highlight few more that caught my attention: Some features are on selected models.

Four colours from the outgoing model have been retained.

Hover over the thumbnails to preview in the main window. Some of these colours may not be available locally.

I realise this post is already long, but stay with me. Cos further down, we now have the PRICES! Yes, pricing on all 23 models of the new Hilux range!

Phew – you’re obviously a tough Hilux lover if you made it this far! So here’s the video review I promised, and a photo gallery further down.

Watch your email and our Facebook page for any updates. And if you’re in and around Durban, please join us for the launch on the 27th Feb 2016