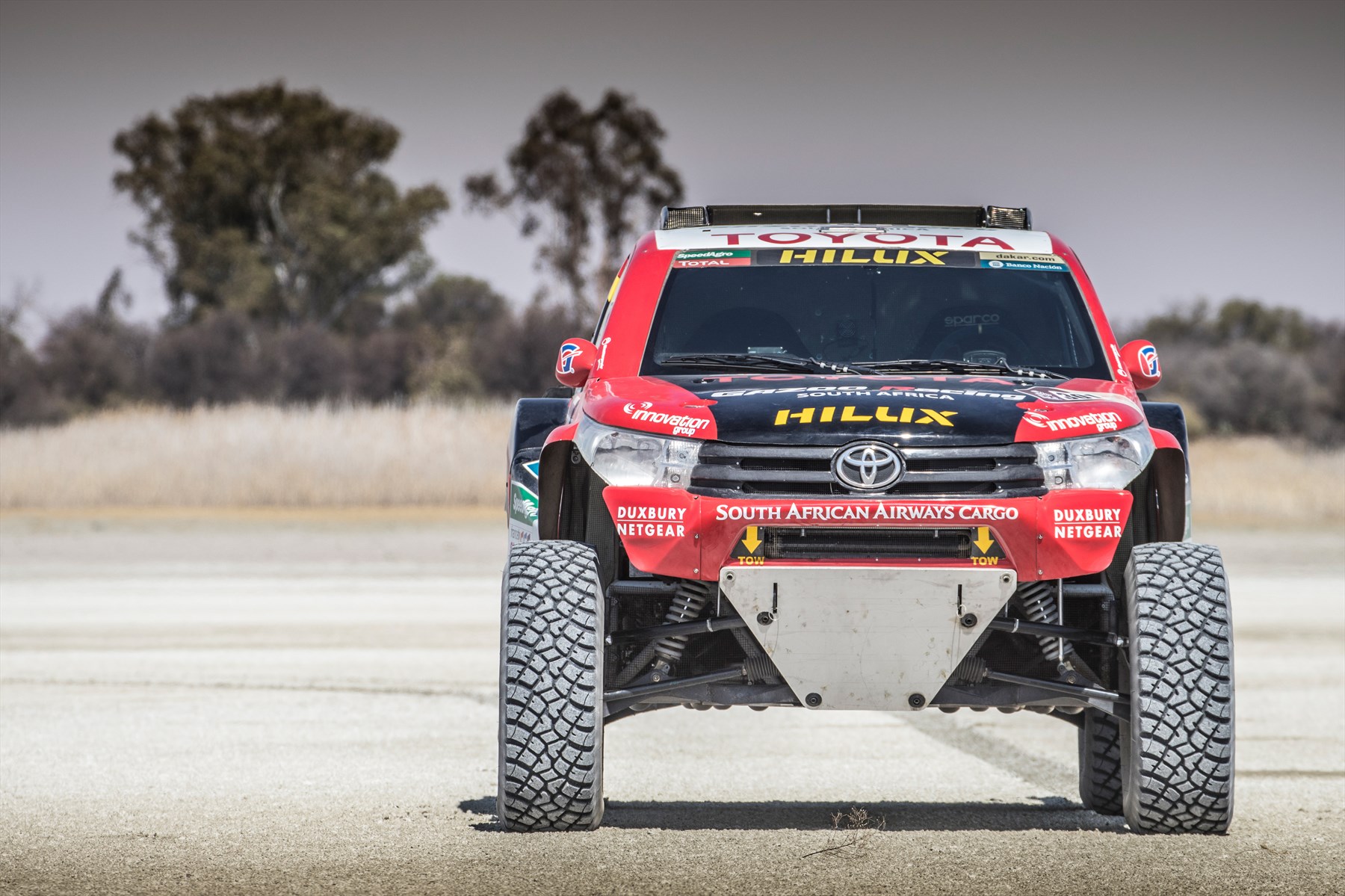 “It is an exciting time for us,” says Toyota SA Motors’s Glenn Crompton, Vice-President, Marketing. “We firmly believe in the Dakar Rally as a means to showcase our technological advances and the legendary toughness of the Toyota Hilux. The arrival of the new vehicle is the next step on this spectacular journey, and we welcome the Toyota Hilux Evo to our stable.”

The new race vehicle sports two-wheel-drive, increased suspension travel, onboard tyre inflation and deflation and a larger air restrictor, as some of the many changes that should allow Toyota Gazoo Racing SA to compete on a more competitive footing during Dakar 2017.

In addition to the new vehicle, the team is also overjoyed at the inclusion of former Dakar winner and newly crowned FIA Cross Country World Cup Champion Nasser Al-Attiyah and his navigator Matthieu Baumel, in the team. Al-Attiyah was rated as the FIA’s top driver during 2015, and will certainly bolster the team’s chances during Dakar 2017.

“Nasser has been extremely happy behind the wheel of our Toyota Hilux, winning round after round of the FIA’s World Cup,” says Toyota Gazoo Racing SA Team Principal, Glyn Hall. “We’re looking forward to his input in the development of the new vehicle, and even more to him donning the Toyota Gazoo Racing SA colours for Dakar 2017.”

Al-Attiyah will join Giniel de Villiers and Leeroy Poulter in the driver line-up for 2017, while De Villiers will again be partnered by long-standing German navigator, Dirk von Zitzewitz. Poulter will have Rob Howie beside him in the Toyota Gazoo Racing SA Hilux, for their fourth Dakar together.

This is already an unparalleled milestone, which may be even more spectacular should Poulter achieve his goal of winning both the cross-country and rally championships this year. The only South African to achieve this in the past was Hannes Grobler, who won both titles in 1986. He didn’t, however, win every race of both championships.

In the international arena, the South African-built and developed Toyota Hilux has notched up five victories on the 2016 FIA Cross-Country World Cup circuit, in the hands of Al-Attiyah and Baumel. The Toyota Hilux has become a familiar sight at global cross-country events, with no fewer than 28 Toyotas completing the 2016 Dakar Rally in the car category alone.

Gallery of the New Hilux Evo on Its First Test

The brand new Toyota Gazoo Racing SA Hilux Evo enjoyed its first test session recently, when Giniel de Villiers and navigator Dirk von Zitzewitz put the revolutionary two-wheel-drive vehicle through its paces at a location in the Northwest Province of South Africa. It was the first real-world test for the Toyota Hilux Evo, and the initial results were highly encouraging.

“It is always exciting to put a completely new concept to the test,” says Toyota Gazoo Racing SA Team Principal, Glyn Hall. “And the Toyota Hilux Evo is just such a concept. Now that we’ve had a chance to see it in action over terrain that matches certain parts of the Dakar, we are highly encouraged.”

The new vehicle is a departure from Toyota Gazoo Racing SA’s proven four-wheel-drive vehicles, which have attained spectacular results on the Dakar Rally over the past five years. These vehicles are also dominating the local Donaldson Cross-Country Championship, with Leeroy Poulter and navigator Rob Howie leading the championship.

As its name suggests, the Toyota Hilux Evo, represents the next evolution of Dakar racing for Toyota Gazoo Racing SA, and will allow the team to compete on a more even footing that ever before.

The first test was aimed at validating the design, more than developing the vehicle further. As such, De Villiers/Von Zitzewitz tested the Toyota Hilux Evo over a number of different terrain types, and always came back with positive feedback.

“The new vehicle is significantly faster over the rough stuff,” said De Villiers at the completion of the test session. “Granted, it takes some getting used to, and it certainly doesn’t feel the same as the four-wheel-drive. But man, it is quick!”

The Toyota Hilux Evo has a target weight that is nearly 600 kilograms lighter than the current race vehicle, and even though attaining that target is nearly impossible, the new vehicle will certainly have a significantly better power-to-weight ratio.

“Now that we’ve proven the concept, we’ll go back and refine the vehicle as much as possible,” says Hall. “We’ve got a lot of data on the dampers and settings from the four-wheel-drive, so we’re not starting from scratch. With that said, we’ll need a lot more testing before we ship the vehicles off to South America in December.”

In the meantime, the fabrication crew is constructing two more Toyota Hilux Evos at the team’s HQ in Barbeque Downs, near the Kyalami Racetrack in Gauteng, South Africa. These vehicles will be allocated to Leeroy Poulter and Rob Howie; as well as the team’s latest signings, Nasser Al-Attiyah and Matthieu Baumel.